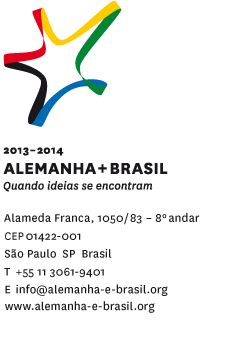 Starting in mid-May, the theme year “Germany + Brazil 2013-2014” will guarantee a festival of ideas around Rio de Janeiro and Sao Paolo. With the slogan “Were Ideas Connect”, the event is promoted by Germany’s Federal Foreign Office.

The BDI Brazil Board is the project manager, while the Goethe Institute will act as deputy. Other members of the project team include the Federal Ministry of Education and Research, and the Federal Ministry for Economic Cooperation and Development. The international communications agency media consulta (mc) has developed an integrated campaign for the initiative. The two main goals of the German Year in Brazil 2013-2014 are deepening the positive and longstanding German-Brazilian relationship, as well as creating a new impulse for cooperation. Following the slogan “Where Ideas Connect”, the initiative focuses on the guiding theme: “Where will we live tomorrow? Innovation, Sustainability and urbanity”. “During the year, Germany wants to provide an image of itself that is up-to-date and depicts the country in 360 degrees – in the areas of economy, technology, sciences, culture, environment, education, sports and lifestyle”, project leader Claudio Struck explains. Until May 2014, a total of more than 400 events, as well as media coverage in Rio, Sao Paolo, Brasilia and the capitals of Brazil’s various states, will provide the framework for this important task. The target group of the German Year in Brazil 2013 – 2014 is primarily educated Brazilians between 17 and 40 years old, living in the country’s urban regions.

Gauck and Rousseff launch the event


13 May will mark the starting point, when Brazil’s President Dilma Rousseff and German Federal President Joachim Gauck launch the theme year – with the Berlin-based agency media consulta (mc) drawing attention to it. Until the end of the German Year, mc will be responsible for the whole press work, organising press conferences and roundtable talks, coordinating interviews, securing media cooperation (including TV coverage) and guaranteeing a broad social media presence as well. Of course, classic advertising will also play a role, while an array of measures are planned. Two planning offices in Sao Paolo and Rio de Janeiro are the centerpiece of the communication strategy. They will be focused on project management, conception and consulting. “On-site presence is absolutely necessary, particularly regarding a project of this dimension”, mc’s CEO Harald Zulauf says.